No other Love by Aarti V Raman from Something Old, Something New - A DRA Production 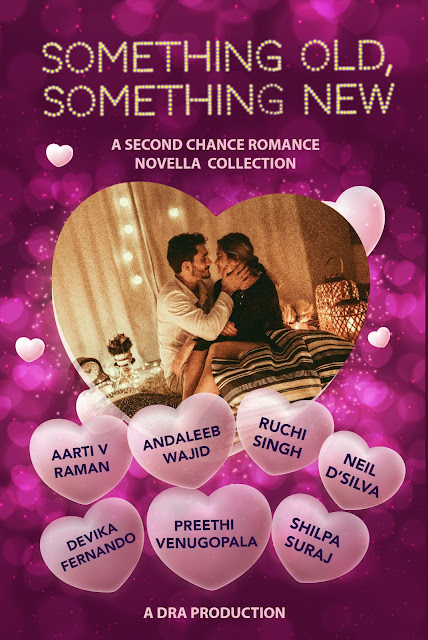 No by Aarti V Raman

Can they live with the reality of each other, when no other love will do? 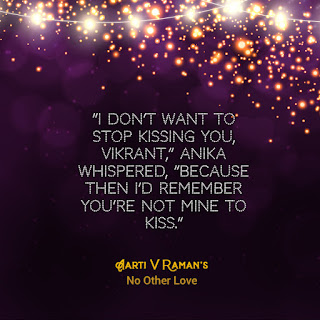 Once upon a time, Vikrant and Anika had their happy ending..until they ruined it with pride, ego, and ambition.
When Vikrant Pandit, GP, left his wife to go back to Aronda, the small town he grew up in, he imagined it was forever.
A year later... he's back. Worse, he needs Anika's help.
, MD, when Vikrant left. Taking her heart with him. But when he asks her for help, she deny the only man she's ever loved.
Anika agrees to pretend they’re still married. But living together brings to light bittersweet revelations and red-hot desire.
Can they live with the reality of each other when no other love will do?

Read an Excerpt from No

“So, tell us about running a hospital for the poor people, ?” Dr. Vinod Swamy asked with a snicker.
Anika closed her eyes as she heard her husband’s reluctant laugh. It was low, throaty, entirely too masculine for her peace of mind. It was melting her bitterness she couldn’t stand it.
“Don’t be silly, Swamy,” Anika said, as she shouldered her way to the forefront of the gaggle of admirers. “Vik isn’t running a charitable hospital. It’s a small clinic in the middle of nowhere. And,” she aimed a nasty, vicious smile at poor Swamy. “I’ve seen the houses in Aronda. None of them are poor, man.”
Swamy smiled uncertainly while an awkward silence reigned around the group.
“Anika, I thought you were in NICU,” Dr. Anu said, finally. “I was just going to text but you know how bad the network is on the fifth floor.” Anu had tried to mediate between her and Vikrant back when a mediation might have worked between them.
“Yep, I know,” Anika said.
She still didn’t look at Vikrant, even though she knew she had his attention. Say what you will but the man was predictable. If she was anywhere in the he was looking at her. Silent, with intense focus. Too bad that is all he did.
Talking was not his strong suit.
Anika couldn’t believe she’d found his silent, brooding neurosis hot once upon a time. What a silly, immature girl she’d been.
The silence continued for a few more seconds before Dr. Tripathi cleared his throat as his phone beeped. “Hey, look at that. I have a patient to look at. So nice to have you back, Vikrant.” He slapped Vikrant on the shoulder. “We have to hang out outside of this hellhole before you leave again.”
“Sure, Ashok. I’ll text you, okay?”
That was the secret cue for everyone to disperse until it was just Anika and Vikrant at the huge booth. She remained standing he was sitting.
He looked the absolute samesame scruffy beard, piercing, unreadable eyes. Maybe he’d lost a of weight around the cheeks but the rest of him looked the same. Tall and vital and strong.
She hated him for it.
Finally, Vikrant broke the silence. He leaned back against the booth, resting one long arm on the headrest. “That wasn’t necessary, you know.”
“What wasn’t?” Anika kept her eyes trained on his face, even though she wanted to look at his shoulders. She used to sit there. Right next to him, safe in the circle of his arm. , he used to call her. Sticky. She’d been so stuck on him.
It was horrifying but tears unexpectedly spurted in her eyes. She blinked rapidly, clenching her fists to stop them.
“Attacking Swamy and Anu. They were just trying to defuse the situation.”
“The situation being me, right?” 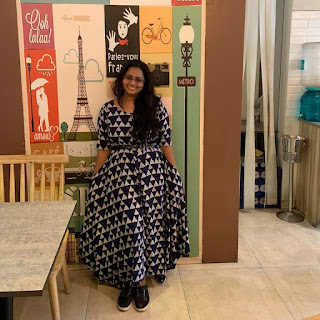 Aarti V Raman is a hybrid author of ten novels of romantic women’s fiction. She is the -founder of Desi Readers Adda, India’s first Facebook community by multi-genre authors for readers to discuss books and reading in a safe, inclusive space.
A former business journalist turned full-time writer, Aarti’s more notable works include Kingdom Come, the Geeks of Caltech series, More Than You Want, The Perfect among others. Aarti is also a columnist, speaker, and an amateur poet.