Along Came a Spyder by Apeksha Rao 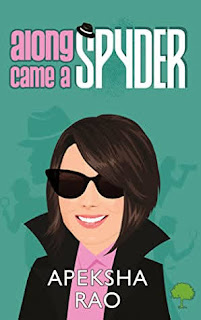 At 17, Samira Joshi has only one dream in life.
She wants to be a spy. And why not?
Spying runs in the Joshi genes. Her great-grandmother was famous for sticking her nose in everyone’s business. Her grandmother had a flourishing side-business of tracking down errant husbands and missing servants. Her parents are elite intelligence agents for RAW. Yet, they want their only daughter to become a doctor. When she sees a college friend being trapped by a pimp, Samira does some spying of her own, and discovers the existence of a secret sisterhood of teen spies — The Spyders. And, she wants in!
The question is, do they want her?
Book Links:
Goodreads * Amazon

Read an Excerpt from Along Came a Spyder

Three in the afternoon is such a wrong time to be tailing someone, that too, when you’re stuck in a car that’s getting hotter by the minute. I stared longingly at the McDonald’s across the road. The orange float on the hoarding was calling out to me, but I didn’t have the time to fight my way through the crowd of college students just to join the long queue at the beverage counter.
I turned my face resolutely away from the hoarding and narrowed my eyes at the target — a plump woman with tacky gold highlights and loud makeup, stuffing her face with fries as she haggled over a pair of mojris. Our driver, Ranga, sighed for about the fiftieth time and as usual, I ignored his passive-aggressive sighs. He was just bitter because he was stuck driving around a bunch of girls, instead of some top cop.
“I was the official chauffeur for the Assistant Commissioner of Police, for twenty years. Not once was I in any danger. But in the one year that I’ve been driving these crazy girls around, I’ve been shot at thrice! The third time, the bullet missed my head by just an inch,” he’s been known to grouse.
That was a gross exaggeration.
We have CCTV footage of the whole incident. The bullet missed his ear, not his head and that too, by a large margin. Also, if he had just kept his big head down like he was told to, the bullet wouldn’t have been anywhere near him.
But no! Catch our macho Ranga taking orders from a chit of a girl, even if said chit of a girl knows fourteen different ways to kill a man!
Yet, according to him, ‘these crazy girls’ are the cause of all his problems. Which is so unfair! It’s not like we go looking for trouble. At least, I don’t. I don’t have to, because trouble comes looking for me.
“Curiosity is one of your besetting sins,” my Baba used to say.
“No Ranjit,” Ma would argue. “Curiosity brings forth information.”
For my Ma, information of any kind was always gold. What she found really sinful, was my tendency to find trouble. Drama was anathema to my parents.
“Yet, trouble and drama follow you like a drone to its homing beacon, Samira!”
A slap on my arm snapped me back to the present.
Debbie was raving about something.
“Sammy ya! Just look at this cheap aunty. I bet she won’t mind dropping thousands in one of her high society card parties, but see how much she bargains for a pair of shoes. He has kids to feed, you mean cow,” she said, shoving a handful of chips into her mouth.
I sighed. It was way too hot for a sociology lesson. Plus, Debbie’s rants were getting a little old. It didn’t take too much to get her revolutionary Bong blood boiling, and she was totally capable of inciting a French Revolution-style riot if you let her go on. But this was neither the time nor the place.
“Debs, I don’t care how much they haggle. I just want her to get on with it,” I said, squirming on the hot car seat. My skin was starting to fuse with the rexine of the seat.
Monica Shah finally walked up to the store and stood looking around.
“Oh, go in already! You’re not fooling anyone with your dawdling. We know you’re going into Pretty Woman,” I grumbled.
“Okay, here she goes. Give her 15 minutes, then, you go in, Debs. If you can, please take some pics of whatever she does in there. Just don’t lose her, and whatever you do, don’t get caught. If they catch you taking pics, deny it outright. Your camera app will upload the pics directly to the server, so, your phone will be clean. Now, don’t look scared, and admit nothing! When you’re done, meet me at the end of the lane,” I said as I sent Debbie off with an encouraging fist-bump.
Then, I sank down in my seat, and whispered to Ranga, “Do you think we’re going to survive Debbie’s outing in the field?”
“I don’t know. All I know is that I don’t want to die so soon,” whimpered the lily-livered Ranga, in response.
About the Author:

Apeksha Rao is a multi genre author from Bangalore.
She is the author of Along Came A Spyder, which is the story of a seventeen year old girl who wants to be spy.
Apeksha has written many short stories based on the same series, The Spyders, which are available on this blog.
She is a voracious reader, and a foodie.
Apeksha's current works in progress: A middle grade book, a chick lit featuring a detective, and a horror novel (the writing of which is giving her sleepless nights).
Apeksha on the Web:
Website * Facebook * Twitter * Instagram
Posted by Preethi Venugopala No comments: