Today on 'On Writing', we have Reet Singh, an ophthalmologist, who makes time for her other passions – reading and writing, watching romantic comedies, and doing creative things with wool and a crochet hook. She enjoys working on cryptic crosswords and playing Scrabble®. When she has no other choice, she can be found in the kitchen putting together her 'world-famous' one-pot meals.
Wecome to 'On Writing', Reet!

Was becoming an author always your dream or was it a particular event or incident that gave birth to the author in you?

I have always been a reader; but then when my sons were born, I discovered that I needed to learn how to pull stories out of thin air every night after lights out. My husband and I continued the tradition that our parents had started – the telling of the bedtime story. The boys wanted a new story every night and I would cook one up for them with great inventiveness – the ritual inspired me to try my hand at writing - the boys have grown up and flown the coop, but I’m still writing.

You are a popular traditionally published author.  You are venturing into the Indie publishing route with your third novel. What made you to try the indie route?

That’s such a nice thing to say – popular! Thank you, Preethi.

As a brand new writer, it was a lovely break to find a traditional publisher who was willing to take on my stories. I won a two-book contract with Mills and Boon® when they were looking for Indian authors for their imprint. This was in 2013 and they published ‘Scorched by his Fire’ and ‘The Cure was Love’ in 2014.

After that, I discovered a few things that I hadn’t known before: publishers don’t do more than the bare-minimum publicity for books by newbies, and the reporting of sales is sometimes quite a hopeless mess. In the years after my books came out, I witnessed self-published authors like you, Preethi, having such fun with their book promotions and with the transparency of the sales process, and I made up my mind that I would try it with book three. I have to say that while it was nerve-wracking, being my first time, I have no regrets so far. I am only a few weeks old in the self-publishing world, but I do think I am a permanent convert.

What is the most interesting part and most difficult aspect of going indie?

I love being in control of every aspect of the process from cover design, to editing and formatting, right up to the final publishing. Even after publishing, if I need to edit any part of the book, I can do it at any time that I like.

The thing that I find a little difficult with self-publishing is making the decisions that I’ve just mentioned as being mine to make. Sounds absurd, I know, but it can be a bit lonely as a self-published author. And so, it makes sense to have a support team that you can run to with questions. I’ve been very lucky in that I did have a bunch of writers rooting for me. I have acknowledged them in my book and if you want to find out if you’re one of them you’ll have to buy my book!

How important are the names of the characters in your books to you? Do you spend agonizing hours deciding on their names?

I take naming my characters very seriously. And, yes, the process is agonizing (you picked the right word) for the following reasons: One, half the names I want to use belong to people that I know and it could be potentially embarrassing for me – I wouldn’t want them to wonder if I’ve based my character on them, because, most likely, I haven’t. Then, the name has to reflect some of the characteristics of the protagonist, in my mind at least. I also don’t want it to be a very common name, nor one so rare that my readers find it unbelievable. Also, all the names of all my characters have to be sufficiently different from each other so that readers don’t confuse one character with the other. Agonizing doesn’t even begin to cover it!

I’m afraid I don’t write every day.
No, wait! Let me change that.
I don’t write fiction every day, but I do write for research and academic purposes on a daily basis. I am an ophthalmologist and I collaborate on research projects with other doctors – hence, I have a pile of data that needs to be written up for publication in scientific journals. So, yes, I write every day. My favorite place is in an armchair with my feet up on a stool, or propped up in bed, which ever is closer to me when I decide to write.

What is special about ‘No Escape from Love’?

‘No Escape from Love’ is set in a rural community in Punjab. The protagonists are all city-bred, but I was keen to remove them from the glitz and glamor of the city and try and see how they’d handle life in a village. I’m happy to say that they managed fabulously, apart from a couple of problems that I threw in just to see them squirm - we writers can be wicked that way!

How long did it take to finish writing ‘No escape from Love’?

Preethi, I took ages. I started writing Mohini and Aalok’s story right after ‘The Cure was Love’ came out in November 2014, and I took long sabbaticals in between, so that I completed it only in early 2018.

Three years! I might want to add this as a disadvantage of self-publishing: you have no publisher deadlines when you are self-pubbing, and so you must set a time frame for yourself and keep to it otherwise you’ll end up procrastinating more than writing.

Please share a passage or quote from ‘No Escape from Love’ for our readers.

Aalok wanted to stop Mohini's mad, clumsy dash across the mossy stones. If she slipped she would cause herself serious damage. But he couldn't touch her, not after that ... what a strange, complicated moment that had been back at the stairwell!

He hadn't meant anything, hadn't even thought twice before grabbing her - she would have broken her neck for sure crashing down that high last step.

Shockingly, she hadn't appreciated his help. Aalok rubbed at the stinging at his wrists. She'd scratched him something fierce. What had she imagined he was up to? Why would he hurt her? He was her brother's friend, for crying out loud!

Have you ever faced writer’s block? If yes, how do you get over it?

I cannot say that I have. In any case, I find that simply opening up my work-in-progress and reading a few of the paragraphs that I’ve written earlier gets my brain buzzing and my fingers start creeping toward the keyboard. When I’m stuck with a scene that isn’t turning out right, I put it away and sleep on it. It usually sorts itself out the next time I sit down to write.

What are the three tips you have for readers of this interview who are aspiring writers?


Thank you, again, Preethi. I’ve loved talking to you!

Thank you, Reet. It was fun talking to you. Looking forward to read more from you.

About 'No Escape from Love': 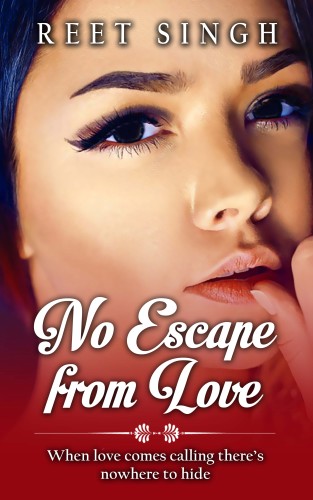 Will the demons from their past succeed in tearing them apart?After personal tragedy strikes, Mohini Kapoor runs away from the city to her grandparents home in a village in Punjab. Though she manages to pick up the pieces of her broken self, and even builds a life for herself, the horror of her experience is difficult to forget. She buries it deep down inside her subconscious mind until the arrival of a stranger threatens to resurrect the old demons.Reputed photojournalist, Aalok Ahuja, has to hide out for a few days to escape circumstances beyond his control. When his friend recommends Tejopur, a remote village in Punjab, Aalok expects life to be simple there and, perhaps, even boring - instead, his world is thrown into chaos by a woman more desirable, and vastly more complicated, than any he has ever known.When their destinies collide, attraction flares, but secrets threaten their new found feelings. Should they cut and run or give love a chance?

The book is free on Kindle Unlimited!
or Buy from:
Amazon.com
Amazon.in
Amazon.ca
NOTE: This article is written as part of the #SuperBloggerChallenge2018 by #Instacuppa conducted by HealthWealthBridge.com, FashionableFoodz.com and AllAboutTheWoman.comand should not be repurposed, republished or use otherwise. The content herein is owned by the blogger. SuperBloggerChallenge2018 is not responsible for any infringement caused.