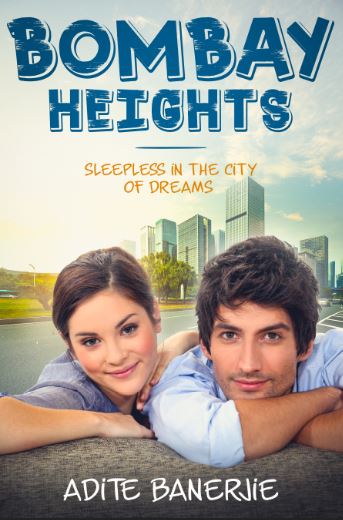 Blurb:
Small town girl Sanjana Kale wants a fresh start in Mumbai. A challenging job and some much needed distance from her ludicrously over-protective family could get her life under control.

Forced to team up with video game designer Ashwin Deo, who is too attractive for his own good, she finds life becoming a whole lot more complicated when he turns out to be her new neighbour.  How can she maintain a professional distance with this charming troublemaker who believes in getting up close and personal?

To make matters worse, her ex tries to manipulate her loved ones to work his way back into her life. Hysterical siblings, a cantankerous client, an ex who will not take no for an answer, and a blow hot blow cold neighbour... Sanjana is sleepless in the City of Dreams! Can she do what Ashwin dares her to--create a few ripples even if it upsets her family?

The promenade in front of the beach was chock-a-block with morning walkers, joggers and yoga enthusiasts. The Laughing Club members were at it—raising their arms to heaven and laughing their guts out.
Ashwin Deo gazed lazily at the sight around him. If it weren’t for Dumbass, he would be sleeping off his dreadful hangover.  The dratted critter gave two sharp yelps. Good God! He had been saddled with a mind-reading dog? The Lhasa Apso was peering at him with brown soulful eyes that would melt the hardest of hearts.
“Okay. I got you here, right? Do me a favour and do what you need to.”
The dog gave a massive tug on his leash and Ashwin lurched forward, nearly crashing into a woman in canary yellow yoga pants and matching T-shirt. His eyes hurt at the bright colours and he mumbled an apology before being dragged ahead by the dog.
“Dumbass!” he yelled firmly. And the dog came to a halt.
“That’s more like it.” He lowered himself on his haunches and peered into the mutt’s eyes. “Let’s get this straight. We keep it civilized. You walk calmly, do your thing and we go back home. Got it?”
The dog’s tongue lolled out from the side of his mouth as he gave Ashwin a beseeching look following it up with a quick lick on his bare knee.
“Right. So, slow and easy. No pulling, okay?”
Another swift lick.
“Thanks, bro. I think we got a deal. Let’s go.”
Ashwin raised his towering six-foot frame and taking deep breaths kept moving along, his eyes narrowing painfully as the hangover continued to hammer away at his head.
Barely had they walked a few paces when Dumbass broke into a series of high-pitched yelps and tugged. Before Ashwin had figured out what was going on, Dumbass gave a mighty yank. The strap tore out of his hand and the dog was hurtling down the promenade at top speed.
“Goddammit! Stop, Dumbass!”
Walkers turned around to give Ashwin funny looks as he took off after the dog.
Every stride sent pain shooting up into his head which threatened to split wide open. The cacophony of screeching tyres, frightened squeals of onlookers and a dashing ball of fur brought him to a standstill.
He bounded on to the street and came to a halt at the sight of Dumbass lying prone in the middle of the road, his lead tangled under the car tyre.
Oh no!
He heard the car door open and someone step out, yelling loudly, “Why in God’s name can’t you control your dog?”
As Ashwin inched forward to pick up the dog, he heard a woman’s lilting voice, “That was close. The leash got tangled under the tyre but he doesn’t seem to be hurt.”
Ashwin let out the breath he was holding and reached out to pick up Dumbass. The mutt was winded but breathing. There was no blood and as soon as he touched him, Dumbass leaped into his arms and did his lickety-spit number.
“You gave me the fright of my life,” he muttered as he got up and turned around.
The driver was only too glad that the creature was alive and kicking. Getting into the car, he ranted about irresponsible dog owners and drove off.
The woman whose voice he had heard said, “Poor thing must have gotten such a fright!”
That’s when he noticed her. She looked like a college student with her long waist-length hair tied casually with a silk scarf. Her big, dark eyes shone with compassion as she leaned slightly towards him to pet Dumbass and a fruity perfume assailed him. Her thick eyelashes swept up and she turned her gaze on him.
“Never been so scared.” He gave her his best hangdog look.
“I was talking about him!”
“Dumbass.”
“Excuse me? Did you just call me, Dumbass?” Her eyes sparkled with annoyance and he came back to his senses with a start.
“No…his name.”
He cursed his blasted headache which made talking such a goddamn effort. She looked at him as if he had some kind of mental disability.
He smiled with effort.  “Perfect name for a dog with no sense of self-preservation, right?”
She glared back at him. “What about the owner who thinks he has no responsibility for his dog’s welfare?”
He took a few deep breaths. “I can explain.”
“Never mind. Just make sure you take him to a vet. There might be some internal injury.”
She gave Dumbass a last pat, bestowed a dirty glare on him and jogged away.
----

About the Author
Adite Banerjie discovered the wonderful world of books at an early age which sparked her interest in writing. After a fulfilling and exciting career as a business journalist, she turned her attention to fiction.

Three of her books have been published by Harlequin/Harper Collins India. She is now committed to being an indie author.

She also writes screenplays and in 2017 one of her scripts made it to the semi-finals of the prestigious Academy Nicholl Fellowships.

When she is not grappling with her current work-in-progress, she enjoys spending time with her husband and watching back-to-back movies.