Book Excerpt: Shadow in the Mirror by Deepti Menon 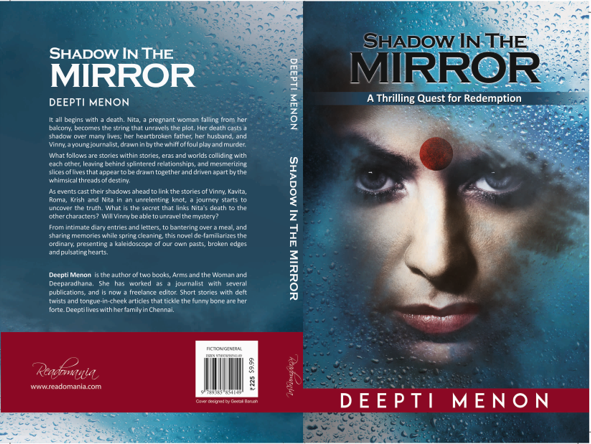 The door opened and her aunt bustled in. An air of expectation hung about her, tempered by an aura of anxiety that surprised Kavita. “Kavita, child, please don’t let your heart rule your head!”

Her aunt seemed to be actually pleading with her. Kavita nodded mechanically as she looked at the older woman’s lined face. Wasn’t this her future being decided?

“I will not make any compromises, whatever Aunty says!” she said to herself, but at the moment it was easier to concede to her.

One last look at the mirror, the smoothening down of an unruly curl that kissed her flawless profile, and then she waited in impatience for the summons. The minutes went by, dragging their feet, emphasized by the ticking of the clock. Or was it actually the beating of her heart?

Finally, her aunt led her towards the drawing room, tea tray in hand, as her uncle’s voice could be heard making conversation. As she glided in, she was aware of many eyes devouring her, and she was satisfied with a deep indrawn breath which signified that she had made an impact upon them. She walked gracefully across the room, placed the tray on the centre table and sat down demurely, as her aunt had ordered her to do, even though she was longing to burst into giggles, as her mind went back to all that she had once told Vaishali. Her eyes moved around of their own volition furtively, searching for the ‘boy’ who had come to see her.

There was a moment’s silence, as glances were exchanged. Kavita had taken a complete survey of the room. She did not see the man of her dreams anywhere. Instead, she saw a mousy little man with a hint of buckteeth… surely this could not be Shekhar! She glanced around frantically, but none of the others could be termed bridegroom material for they were all rather ancient. The women seemed younger but she wasn’t even looking at them.

“This could not be Shekhar!” Oh, no, her heart cried out in anguish. Where was her dashing Shadow Prince?

She jerked back as one old gentleman asked her a question, and she replied to all the queries dully, till she could stand it no more. There was a dreadful ringing inside her head, and she felt the earth spinning around as the familiar tinkle of glass assailed her, and she stood up with a jerk, swaying on her feet! Varying expressions of surprise ran across their faces as she fled from the room, a nasal voice haunting her very being, a voice that could only be Shekhar’s!

Safe in her room, she lay on her bed, her beautiful sari wilted, and stared dry-eyed at the ceiling. Her dreams had come crashing down like a house of cards, all in a moment. Her aunt came rushing in, excited and vociferous. She had taken Kavita’s flight as the bashfulness of a young girl at the sight of her suitor. She had assured the visitors that she would be back in a moment, and her voice shook with excitement. 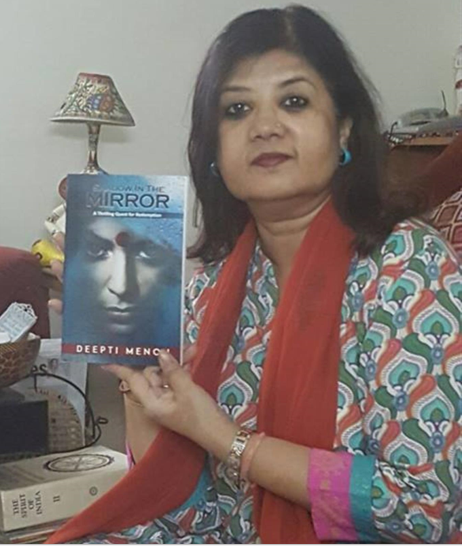 Deepti Menon is the author of two books, ‘Arms and the
Woman’ and ‘Deeparadhana’. She has worked as a
journalist for several publications and is now a freelance
editor. Short stories with deft twists and tongue-in-cheek
articles that tickle the funny bone are her forte. Deepti
lives with her family in Chennai.

Availability: The book has been published by Readomania and is available on Amazon.in and in major bookshops, like Starmark and Odyssey.