Today on 'On Writing', we have Utkarsh Patel, who is a corporate professional turned mythology author.

Utkarsh is also a regular speaker and lecturer on varying subjects of mythology and other topics, at various forums, litfests, organisations and colleges.

Welcome to 'On Writing', Utkarsh Patel! 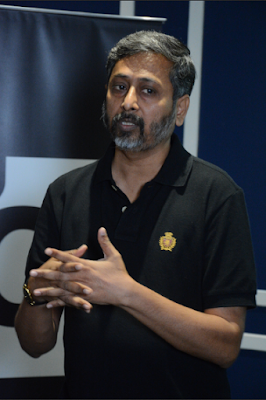 You are a corporate professional turned mythology author. How did this transition happen?

I would think it began with my teaching at the Mumbai University, where I was teaching Comparative Mythology. I was beginning to enjoy teaching, reading and researching on the subject and around the same time, I was beginning to lose interest in my profession which included the routine – travel, meetings, targets, etc. When my first novel found a publisher and it was in process, I was commissioned for another book. That is when I decided to take the plunge to a full-time author, speaker, and teacher.

How much important is research while writing a mythological novel?

In my opinion, that is the most important part of mythological writing. Mythological stories exist and many of us are retelling or interpreting the story. If one has to do so successfully and honestly, then one has to study them and know what one is retelling or interpreting. With fragments of knowledge, or without a proper research, one ends up writing just a fiction, which uses characters from mythology. That is not a mythological novel.

Well, I do write every day, but some days are busier than others, so there isn’t quite a fixed time. However, I do try to ensure that there is continuity with both the story and the thought. I for one do have a favourite place, but that is more out of design – my study table!

What is different about ‘Kannaki’s Anklet’?

Kannaki’s Anklet is an effort to bring the Tamil epic Shilappadikaram, to a larger audience and in a relatively easy prose format. While the epic has been translated by academic scholars, Kannaki’s Anklet is an effort to make it easy reading for the modern reader who is exploring the hidden gems of regional literature, without getting into the academics of it. This book is an easy translation, and enables a smooth flow.
Shilappadikaram, though an epic, doesn’t follow the rules of an epic. It was written in Tamil and not Sanskrit. The protagonist is a female, who is not a divine or a semi-divine character, the action is not around palaces and there is no war. All this is a far cry from what makes an epic. Besides, this could be the only epic which rests on the shoulders of a woman and not a male. In my opinion, this is a unique epic in that sense and brings out the human aspects from out day to day life, at the same time, sending a very strong message to the leadership of our times. Kannaki’s Anklet keeps all these differences in mind and brings it for all those who might not have been exposed to this gem which is a part of the Sangam literature.

Did you face any difficulties while writing this book?

My lack of Tamil language was an issue, so at times understanding the cultural nuances was something that bothered me. Also, the available English translations were very authentic. I didn’t want my book, to be just another translation or as just another academic work, to be relegated in the shelves of libraries. I wanted more people to be aware of these regional gems, so to make it both true to the original, at the same time make it more interesting than an academic translation, was in my opinion quite a difficult thing. I sincerely hope I have managed to do that!

How long did it take to finish writing Kannaki’s Anklet?

I took me about 8-9 months of writing and the first draft and I guess another month or so, for some more.

How important do you think is marketing in today’s world for any book?

It is as important as writing! You could be a good writer with a good book, but if it doesn’t reach people, then the effort is completely wasted. While I do agree that a good book will speak for itself, but in these modern times, when the market is full of books of different genres and people moving away from books, a good amount of marketing takes the book closer to its readers. Also, we live in times of push-mechanism, where something gets accepted much easier, if it is known to them, than something that one has to seek out.

Please share a passage or quote from ‘Kannaki’s Anklet’ for our readers.

The following is an extract, wherein the male character in the story gives into the lures of life. The extract is an example of how men often end up justifying errors as a bit of manly extravagance and how giving into such lures is just being a man – 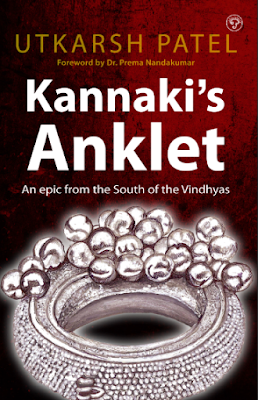 “Curiosity was working her seductive skills on Kovalan. Could she be an apt counterpart to his music? Could her dancing skills be the perfect complement to his skills of singing? Oh, what a thought? But the thought had moved further from a simple exploration of complementary skills. Kovalan couldn’t help imagine, what it would be to sleep with a woman, who has been trained in all forms of art for the bed. It sounded a bit odd, to think that someone could be adept in such an art form in the first place if there was such a form. He had never imagined this before, not because he was not capable of such things, it’s just that it had never occurred to him before. But now things were different, he had learnt quite a few things himself and was willing to learn more and needless to say, enjoy more too. A woman, who has enthralled the king on her very first performance and has got the entire kingdom speaking about it, must be some expert in such art forms too. This was unbelievable and quite enticing a proposition, to say the least. What is a man, whose adrenaline doesn’t egg him for something different? What is a man, whose masculinity doesn’t engage in acts beyond the ordinary and mundane? What is a man, who has not gone a bit wayward for the sheer fun and adventure of it? What is a man, who doesn’t take advantage of the simple fact, that he was a man?”

What other works are you currently working on?

Currently, I am working on a few projects which are again based on mythological characters and events from mythology. I am trying to work on a concept which is prevalent in mythologies of the world and see if it can be brought out in the form of a fiction; however, it is still at a nascent stage.

What are the three tips you have for readers of this interview who are aspiring writers?
Thank you, Utkarsh! Wishing you the very best for your books.

Blurb:
Kannaki's Anklet is a near-adaptation of the Shilappadikaram, a masterpiece of the Sangam literature that showcased Tamil life and culture in its full splendour. The epic highlights the trials and tribulations of Kannaki, an ordinary woman, who endures personal adversities but chastises the king for his single act of misdemeanour and injustice. Her anger burns down a city, forcing the goddess of the city to come down to appease her-such was the wrath of a woman wronged! An ordinary woman, with mortal desires, goes on to be revered as Goddess Kannaki in Tamil Nadu, as Kodungallur Bhagvathy and Attukal Bhagvathi in Kerala, and as Goddess Pattini amongst the Sri Lankan Buddhists, while the Sri Lankan Tamil Hindus worship her as Kannaki Amman.

Buy the book from:

Or directly from the Publisher