An excerpt from Chapter 1- Vyom: The Sky of Success:

‘For Vyom, its aim is paramount and we’ve been striving to achieve it, every day, every time, every moment,’ Chancellor Jaywardhan Rathore was declaiming about a memorable day in Vyom Hall of Vyom Institute. ‘We will die protecting our world, our country and our people and endeavouring a true victory. Victory of peace over war, of truth over falsehood, of trust over treachery, of hope over despair, of courage over cowardice and of unity over every weakness raising hindrances to a better future.’ He gestured to a man in uniform, who had a powerful physique, sitting next to him. ‘I heartedly welcome my dear friend, Major General of Vyom’s army, Sagar Mittal, to our institute to celebrate this great moment.’
Vyom Hall was witnessing the presence of professors, scientists, officers and all groups of students: Buddha, Shukra, Vasundhara, Mangal, Brihaspati, Shani, Arun and Varun. 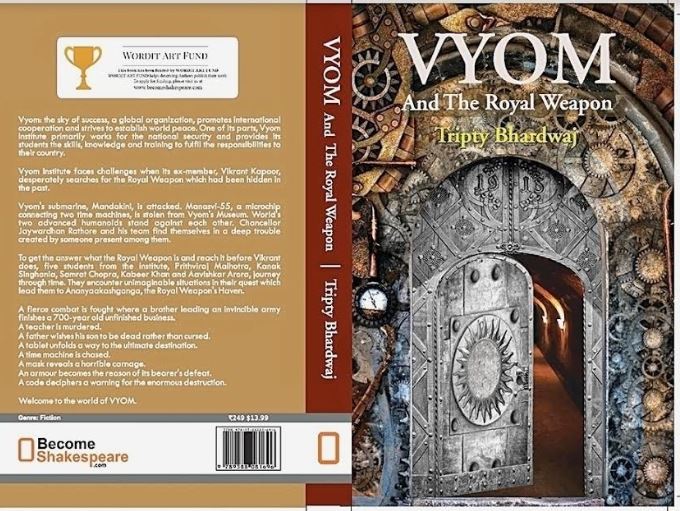 Jaywardhan continued, ‘A century ago an organization named Vyom, the sky of success was founded with a sole aim. For achieving it we must realize our duties, our responsibilities towards our world and country. We must feel that the people we live among, their safety is our prime duty, their happiness is the source of ours. Today is a glorious day for all of us, as a family, as a team.’
Everyone perked up.

Jaywardhan Rathore in his early fifties, with a set of rectangular glasses and black-white moustache, had an efficacious personality. A gentle person of firm determination. He’d started his career as an Assistant Professor in Vyom Institute. His hard work and passion brought him to its highest post.

Vyom Institute was a spacious-green campus, had forty main multi-storey buildings, Bhavans, with three wings each, and a head office. All the bhavans were scattered forming twelve concentric ellipses, Parikramas, around the head office. A group of smaller structures collectively known as Sanrachana situated between the sixth and the seventh parikrama included canteens, auditoriums, arenas, stadiums, sports clubs, guest rooms, cyber cafés, etc. Vyom Institute was more or less constructed like the solar system, eight planets replaced by forty bhavans, the asteroid belt by Sanrachana and the sun by the head office.

Tonight the entire campus was sparkling with decorative lights and streamers vying for attention. Open corridors and courtyards were adorned with shimmering curtains, flowers and rangoli, embellishing the ambience. Everyone was savouring the rollicking festival to their heart’s content. Colourful water, dancing at melodious music, was jetting out of the fountains making every feet move rhythmically. But Jaywardhan’s heartbeat had gone out of rhythm. He was in conversation with someone in the Chancellor’s Cabin through his wireless single earphone, a concerned look on his face, ‘What? But how did he branch out, Ali?’

Ali’s voice came from another side, ‘I’m working on it, Mr Chancellor. But he’s scheming to get DTM’s system for sure.’
‘You take care of yourself. He must not come to know that you work for us.’
‘Don’t worry,’ said Ali. ‘I’ll keep you updated.’
‘Vyom farewell.’ Jaywardhan disconnected his earphone. Ali’s words had set him thinking. Murmuring to himself, he paced up and down his cabin.
His thoughts were distracted as Damini Rathore, his wife and a scientist, elegantly dressed in a beautiful cotton-printed sari and tying her black hair in a bun, entered.She asked, ‘Did Ali get anything about Vikrant lately?’
‘No, no-thing. Everything is...’ Jaywardhan looked away. ‘Anyway, it’s time to go to the hall.’
‘What’s the matter, Jay?’ Damini looked straight at him, his expression troubling her deeply.
‘I’m fine. You don’t worry,’ Jaywardhan’s voice grew weaker.
‘So it’s definitely about him, isn’t it?’ Damini turned him towards herself, sensing his inner turmoil.
Jaywardhan removed her hand from his arm. ‘Vikrant’s ambitions are exceeding, Damini. If we don’t stop him now, he will ruin everything.’
Damini stood still, great anxiety enveloping her face.
Jaywardhan took a deep breath and motioned his eyes to a framed painting hanging on a wall behind his chair showing a range of red mountains with the sun floating on a river. ‘I’d made a promise to sir and I will keep it at any cost.’
A tiny flashlight on a sapphire metallic belt tied on his wrist blinked green. Coming out of his memory, Jaywardhan saw a name on a small screen fixed into it, touched the screen and said through his wireless single earphone, ‘Yes, Yash?
Assistant Professor Yash Chauhan’s voice came through it, ‘Mr Chancellor, the celebration is about to begin. We’re expecting both of you.’
‘We’re coming, Yash. Vyom farewell,’ replied Jaywardhan, taking a quick look at Damini.
As Jaywardhan rang off, Damini spoke, ‘But our.....’
‘We’ll talk later.’ Jaywardhan made for the door. ‘You’re coming, aren’t you?’
After a momentary pause, ‘I am,’ answered Damini.
Vyom Institute, a part of Vyom Organization was situated on Niketan, one of the eight islands collectively known as Vyomdweep in the Indian Ocean. Vyom Organization primarily worked for the national security, had its headquarters in India’s commercial capital, Mumbai and its offices in almost all the countries of the world. Every year, new batches of twelfth pass students who desired to be a member of Vyom Institute were called in Vyom Headquarters. They had to pass a rigorous but transparent multilevel selection test, Vyom Eligibility Entrance Test- VEET, and show their skills, capabilities and determination. If they passed all the levels, they were welcomed in Vyom Institute.

Vyom: the sky of success, a global organisation, promotes international cooperation and strives to establish world peace. One of its parts, Vyom Institute primarily works for the national security and provides its students the skills, knowledge and training to fulfil the responsibilities to their country.
Vyom Institute faces challenges when its ex-member, Vikrant Kapoor, desperately searches for the Royal Weapon which had been hidden in the past.

Vyom's submarine, Mandakini, is attacked. Manasvi -55, a chip connecting two time machines, is stolen from Vyom's Museum. World's two advanced humanoids stand against each other.
Chancellor Jaywardhan Rathore and his team find themselves in a deep trouble created by someone present among them. To get the answer what the Royal Weapon is and reach it before Vikrant does, five students from the institute, Prithviraj Malhotra, Kanak Singhania, Samrat Chopra, Kabeer Khan and Aavishkar Arora, journey through time. They encounter unimaginable situations in their quest which lead them to Ananyaakashganga, the Royal Weapon's Haven.
A fierce combat is fought where a brother leading an invincible army finishes a 700-year old unfinished business.
A teacher is murdered.
A father wishes his son to be dead rather than cursed.
A tablet unfolds a way to the ultimate destination.
A time machine is chased.
A mask reveals a horrible carnage.
An armour becomes the reason of its bearer's defeat.
A code deciphers a warning for the enormous destruction.
Welcome to the world of VYOM. 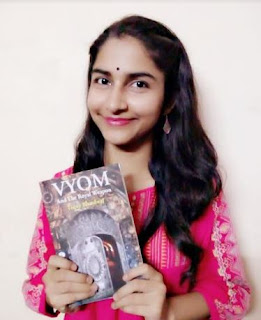 She has worked with Doordarshan as a scriptwriter and an anchor in the shows 'Geet Bahaar' and ‘Geet Gunjan' for two and a half years and as a newsreader in an agricultural based show ‘Krishi Darshan' for three years.

Tripty has always been a voracious reader of a variety of literature especially science fiction, mythology and thriller and mystery. Being a creative and self-motivated writer, she always tries to formulate her writing in a meaningful and logical manner. She successfully turns her framework of mind into simple and understandable language.