Remember When: An Excerpt 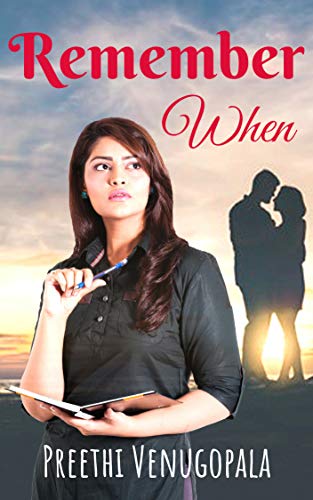 The rain pattering on the window, leaving trails of silver threads shining in the morning light took her time traveling to that morning a decade ago. They had met on a similar damp morning seven years ago.

Tara was then in the second year of her bachelor's degree in English literature. Manu was a senior studying for an MSc in Zoology, a rank hopeful for the entire college. Their worlds didn't usually converge. The science stream and the art stream students belonged in parallel worlds that never ever collided. Yet it did for them, magically, amid the unorganized chaos of a bunch of teenagers trying to create music. Music had wiped out the prejudices that often kept the two streams apart. She was the lead singer and he the lead guitarist in the college band.

Manu had initiated their conversations every time they met. He talked to everyone. She often forgot words in his presence, her tongue tangled. Everything about him fascinated her. The light that animated his liquid brown eyes, lines that crinkled around his eyes when he laughed, his silky-smooth hair that fell lazily onto his forehead every time he moved his head. His broad shoulders that made her want to rest her head on them. And when his fingers, long and soft, strummed the guitar, every cell in her body hummed.

It had felt like a meaningless crush until that college trip. She had signed up for a trip organized by the Nature Club only because she knew Manu was the group leader. The trip had been to the interiors of the nearby forest reserve renowned for its rare species of flora and fauna. Her fascination for him did not go unnoticed by him for long. On the way to the reserve, his eyes had met hers often and she had found a question lingering in them.

Inside the reserve, while they were crossing a narrow bamboo bridge, she froze at the middle of the bridge, suddenly frightened and numbed by the chaotic vista of the wild stream that ran just meters below. Everyone had crossed the stream without any incident. Yet, she couldn't lift her feet the moment she had looked down at the white, frothy and raging stream. After the initial encouraging shouts, all had fallen silent. The bridge was too narrow to accommodate two at the same time.

Then Manu had walked back, encouraged her with kind words. Her fear had been replaced by a warmth she had never felt before. Yet it had not been enough to make her walk. Humiliating tears had streamed down her cheeks and he had wiped them wordlessly. Then, effortlessly, he had lifted her in his arms and walked to the bank. They had all cheered for them. Neither one of them wanted to be near anyone else after that. Sometime that night, while they had sat around a raging bonfire, silently holding hands while the others sang and danced, she had opened her heart to him.

She had traced the four letters declaring her love on his palm, her tongue still unwilling to cooperate. He had squeezed her palm in acknowledgment and then traced a heart-shaped loop on her palm repeatedly. Each stroke sent delightful rushes of pleasure to every inch of her skin. He had taken her hands in his and kissed the tips of her fingers.

A Poignant Love Story with the Chennai Floods 2015 as Backdrop

Dedicated to the volunteers who kept Chennai afloat  during the floods

On the outside, Tara leads a perfect life. A home of her own, a handsome husband, a doting son and a promising career as an author.
But inside, she is a wreck. Her marriage is a sham and she hasn't succeeded in forgetting her one true love, Manu, the man she had wronged. The man she had almost married.
Manu, now the senior editor with a science portal, firmly believes that he has left Tara where she belonged-in his past. But in reality, he hasn't forgotten anything. Not the love nor the hurt.
Their past and present collide when they accidentally meet in Chennai. The city has come to a standstill after facing the worst flood in a century. While nature is unleashing its fury on humans, they must make peace with their past.
Will they have the courage to do that?
Can they fight the attraction that still burns bright?
Or will the bunch of people they are with, teach them new life lessons?
What is the secret that is burning Tara from within?