The Power of the Law of Attraction: Guest Post by Riyaz Baghadiya 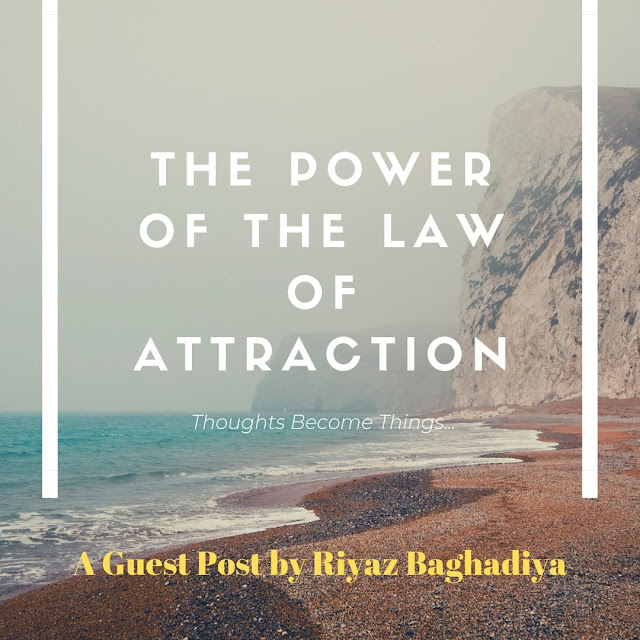 Everything around us happens twice. First in the mind and then in action. From the day one of origin of this phenomenal world. Each and everything around us was first an idea or a blueprint in someone's mind. Later, it became a reality. A similar pattern is still followed and will continue to be followed in the future as well. So, first and foremost have an idea or prepare your mindset according to what you wish to happen in the near future.

The law of attraction simply says that if you think about something that you want to achieve, it can be a promotion, a healthy relationship or a healthy lifestyle, it all starts with just a thought in your mind. It’s like the butterfly effect. If a butterfly wills to cause a storm it could start the process just by flapping its wings.

Let's try to understand the power of the law of attraction with an interesting tale.

Once there was a man who started to walk. He kept on walking for hours and hours and somehow reached paradise. He was amazed by its beauty. Everything was peaceful and calm. As he had been walking for so long, he decided to take rest under a gigantic tree. He was hungry. He imagined all the delicious food he could and after some time all the food he imagined started to appear in front of him. He was happy and without even thinking he started to enjoy the delicious dishes. When his hunger was satisfied with the food, he thought," I wish I could get something to drink. I feel thirsty." Again, he was presented with the drinks of his choice. He slurped it quickly. With little alcohol in his bloodstream, the man thought there was something wrong about this place. Whatever I am thinking about is being manifested.

Now, the man imagined there might be some ghost nearby who is watching him and listening to all his mind’s chattering. Immediately, a pack of ghosts appeared and the man was scared. He now imagined he was definitely going to be tortured by these ghosts and killed by these ghosts. It happened as well.

Whatever the man thought in his mind with full concentration and dedication, it manifested. This, in short, is the essence of the law of attraction.

How to achieve this kind of concentration? It’s simple. Make your mindset so powerful that firstly it is under your own control. This can be solely achieved by mediation. Invest 5 – 10 minutes daily and abundance energy will radiate from you. Once you are ready to change these thoughts about negativity and drive your mindset towards positivity everything would manifest the way you want. If you wish, read this article on controlling the mindset on my blog.

Always remember, you have to start with a thought, a thought of achievement, and work backwards as to where to start from. All the forces around, in fact, the entire universe will conspire and make sure your thought turns into reality. This is the secret followed by most of the spiritual gurus and entrepreneurs to achieve success and calmness into the lives.

For more interesting articles and book reviews that can impact your life in a positive way visit Riyaz’s blog: GoEpilogue.