There is Something About You : Yashodhara lal 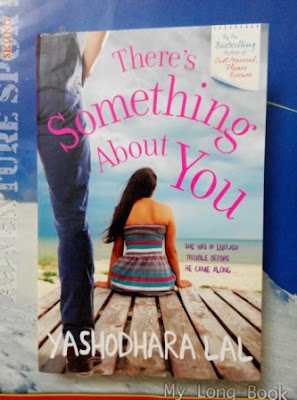 I received this book as part of the Indiblogger Book Review program. The many promotions online had made me apply for it. So what do I think about the book now that I have completed reading it?

This is not your typical boy-meets-girl story. Okay, they do meet, but there are some complications.
Trish is twenty-eight. She’s unemployed, overweight, single and snarky. She knows all that. And if one more person – just one more person – tries to fix her, she might explode. Sahil is thirty-five. He has superpowers. Well, kind of. He seems to think so, anyway. He’s also hot (okay, in a geeky kind of way, but still). And he plays the guitar, helps the underprivileged and talks about his feelings. Aren’t guys like that supposed to exist only in fantasies?
When Trish and Sahil meet, magic happens. Real magic, you know, like fireworks, electricity, that sort of thing. But here’s the problem. Trish doesn’t want anyone in her life. She has enough to deal with – dependent parents, flaky neighbours, bitchy editors, the works. And yet, Sahil is determined to be in her life.

To read a book on a rainy afternoon accompanied by a hot cup of tea is one of the best pleasures that life can offer as far as a bibliophile like me is considered. When the book turns out to be a good read, it is an added bonus. Here, I list the things I liked about 'There is Something about You.'

Trish is a well rounded character (pun intended) and compassionate to the core. She has just been fired from her job and the financial burden of looking after her aging parents, especially her father who is an Alzheimer patient is weighing on her in the beginning on the story. Nothing is rosy in her life. She has a weight issue as well. And everyone wants to fix her, driving her crazy.

The book talks about her transformation from being a doormat to a completely independent and strong character. Sahil, along with his psychic abilities, comes into her life and changes her perception about many things, in a way giving it a proper direction.

They are connected by a past deed and this adds more to the depth of their relation. But Sahil comes in with his own set of problems for which he needs the help of Trish.
Will she be able to handle it all along with the immense burden that life has already thrown on her?

The Letters:My favorite part of the book:

Trish, the protagonist ends up writing a regular column for a newspaper as the anonymous Amy who is famous for employing her tongue-in-cheek humor to solve the agonies of the readers who write in with their problems. She deals with many issues that plague the society and in the process discovers more about herself and life in general. Some letters are silly, some serious and some out and out comical.

Many themes and a simple language

There is an undercurrent of extra-marital affair, child psychology, dependent parents, weight issues and love in this cleverly written book.

Language is simple and the narration is lucid, intriguing. The added element of the letters gives spice and sauce to the otherwise normal story of a girl-next-door.This is a book filled with humor and sarcasm that gives giggles, while it tackles serious issues.

All in all a good read for a rainy afternoon. I really enjoyed it. Yashodhara Lal's writing style reminded me of Sophie Kinsella.
Posted by Preethi Venugopala