Dubai Metro Network is one of the best metros in the world and I am proud to say I was part of its construction team.

I worked with the main contractor of the project, the DURL Consortium which comprised of three Japanese Companies and One Turkish Company. The Obayashi Corporation (of which I was an employee), Kajima and Mitsubishi from Japan and Yapi-Merkezi from Turkey, formed the Consortium.

The Section One of the Elevated Section of the Metro had a stretch of twelve kilometers under it, beginning from Al Rashidiya and ending in Al Garhoud and I was part of the Section one team. The whole elevated section was divided into three sections- Section One was the smallest, area wise but the toughest -conditions wise.

The best thing about the job was, I had amazing colleagues. We belonged to different countries and spoke different languages. Indians, Filipinos, Japanese, Arabs, Europeans, Pakistanis, Bangladeshis, Africans, Americans and people from many other nationalities were part of the Design and Construction team. Some were stationed at the Main office in Deira and visited once in a while, whereas others were stationed in the Section office at Rashidiyah, which was closer to where the actual construction happened.

When I joined in 2006 November, the construction was in its infancy in Section One. The Utility diversion was happening and only a few piles had been concreted. For those who don’t understand what utility diversion is, I will elaborate. In Dubai, unlike in India, most of the utilities - electricity, water, and phone lines- are underground. So before a construction starts the utilities in the area have to be diverted without damage. Trial pits would be dug to look for the utilities which would be marked in the Municipality drawings of the area. A utility being damaged meant thousands of dollars to be paid as fine.

When I left in early 2008, most of the civil works had been completed. The Section was getting ready to be handed over to Mitsubishi for the rail works. The whole project was time-bound and the metro was to be opened for the public on 09-09-09. That was how fast it was.

There was a Countdown board in front of the office which informed us, how many days were left till the D-day. For us it was fun to watch. But I guess for our managers, the sight churned their blood and made it run faster than usual. A day of delay meant millions of dollars in fine. So everything was systematical and the work grind too harsh at times.

I remember leaving work at 8 pm sometimes having begun my day at 8 in the morning. We office staff usually could leave by 5, but when required, we had to stay back, which was mostly often during the initial period.

Later on more staff was added and every week will see five or more staff joining the already strong construction team. I was the lone Indian female in the whole of the construction wing. There were only two other Indian girls in the main office.  They were in the Design wing. Most of the other female staff was Filipinos.


My job was mainly Document and Material control, which though sounds nice, was extremely tiring. I was in charge of the materials to be supplied and I had to order them and then direct them to the various locations. This meant hours on the phone and also hundreds of emails as follow ups. Every day I had to update the main office regarding the progress in our section and that meant yet another number of spread sheets to be filled up daily. There were over a hundred files which needed to be updated on hardcopy as well as soft copy from time to time. And I am proud to say I did it all single handedly. I was the only Engineer in charge of the documents (Construction drawings, design drawings, on site reports, ITR, Concrete Requests, Steel requests and many others) in our Section.

There were many Stress-busters in office....The main being my Indian Colleagues. They were fun and we had the best times together. Most of the Juniors were two or more years younger to me and I would try to boss over them stating I am the eldest. The only thing I gained from that was a nickname. Buddie (the old woman).

The Japanese Managers though Workaholic to the core, were the best among the lot. Their humility always surprised me.
There was only an Indian Manager and we also had the Project coordinator from Mumbai. They too were the best managers I ever had.

And my office mates who were stationed full time at the office were another set altogether. Rona who was the accountant, loved chocolates and was an expert in creating Excel spreadsheets like magic. Jithu - the CAD operator would be glued full time on the computer with CAD drawings that only he could edit. Joseph the Quantity Surveyor would have the most complicated spreadsheets open on his computer.

What helped me the most was that, most of the suppliers/ or the person in-charge of the supplies were Indians. So I would pester them till they supplied promptly. Sometimes they went out of the way with the supply and I am thankful to them till this day. I remember a Japanese Manager who had come to inspect was surprised to see that all our steel deliveries were on time. He said in other sections the supplies were delayed even for months.

During urgent meetings, our workaholic Japanese manager would make a flow chart for me that will have me in the center. It will have arrows coming into and out of the Bubble that was me. Smaller bubbles which were connected to me would be him, the Site Engineers, The Concrete and Steel Suppliers, other material suppliers, the site locations and in some cases even the office boy. The heading would usually have the tag ASAP (As Soon As Possible..his favorite phrase). I used to smile ....What else could I do???? 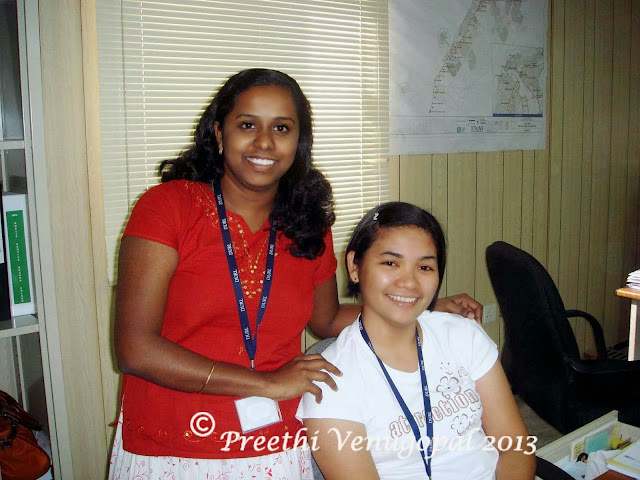 The best days were the weekend, when we would have party to celebrate the end to a grueling week. And also we waited to pounce on any hapless creature that happened to be born on any of the working days for birthday treat. KFC buckets would be ordered or Chinese take a ways and the whole lunch hour will pass merrily. 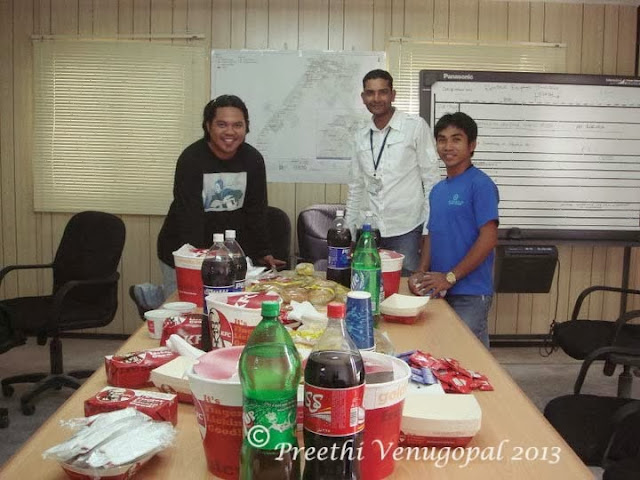 The Annual party which would be held was yet another thing we looked forward to and was FUN from the word GO.

But that will have to wait for another post..It deserves one...