Is Laundry Only a Womans Job?

Did you know that according to a survey conducted by Ariel,

More than
2/3rds
of Indian women feel, there exists inequality at home, between men and women*

of Indian men feel, laundry is a woman's job*

of working Indian women** feel they have two jobs, one at work and another at home*

of Indian men, depend on women for doing the laundry*

After marriage, it is the man who sacrifices most. (I can see your frown ladies after reading this line. Whoa, don't quit as yet. Read on! )
He sacrifices doing his laundry, cooking and even ironing his clothes. The survey above is simply a reflection of the mentality of Indian men. I have a cousin who left to join work with just three shirts and then returned home loaded with 12 shirts that needed to be washed after two weeks because he didn’t know how to wash or iron his shirt. He had cleverly bought new shirts to replace the dirty ones.

I have come to know from my own experience that my husband too belongs to the majority of Indian men mentioned in the statistics and since I work from home, the laundry falls under my household chores.

But as it is the washing machine maharaj that does the laundry in my home, I cannot argue much. Loading the machine itself is a tough and tedious jobs for the male of our species. They believe that by marrying us, not only have they given us protection of their mighty name, but also have given us the auspicious job of being their laundry walas for which even the apsaras in heaven had submitted tender. And it is for life time- no retirement, no hassles.

When I too was working, if I refused to do his laundry it would kindle a fire akin to the fire of hell and so I would surrender to common sense. It is always better to do a few minutes extra work than to endure days of drama. That was my mantra and of course, the secret to my happy married life.

The Indian male expect wives to be the exact replica of their mothers. And most Indian mothers pamper their boys and treat them like fragile china dolls whose entire existence becomes endangered if he washes his own under wear. And the girls are taught right from the age of five to do laundry, to give a helping hand in cooking and all duties that are going to fall into her lot one fine day.

When a girl marries, from the moment she becomes a wife, she is expected to transition into an expert cook and a perfect homemaker even if she is equally qualified like her spouse, even if she is working and even if she has not learned any of these things at her own home.

I remember being advised by the aunties of the society to learn housekeeping skills instead of spending my time reading books or studying further.

"Whatever you do girl, one day you are going to end up in a house washing the dirty under wear of your spouse, just like us.” They had warned me.

The prophecy luckily didn’t come true as a genie called Washing Machine had entered our life by then. We handed over all the dirty job to the Machine and to Ariel. But loading the machine after separating the whites from the colored and hand washing the delicates are still my job. There is no cure to laziness of men when it comes to housekeeping work at home. They are the kings of procrastination.

In the famous book ‘Eat, Pray Love’ by Elizabeth Gilbert, Elizabeth calls to inform her girl friend Susan that her new boyfriend David did her laundry. 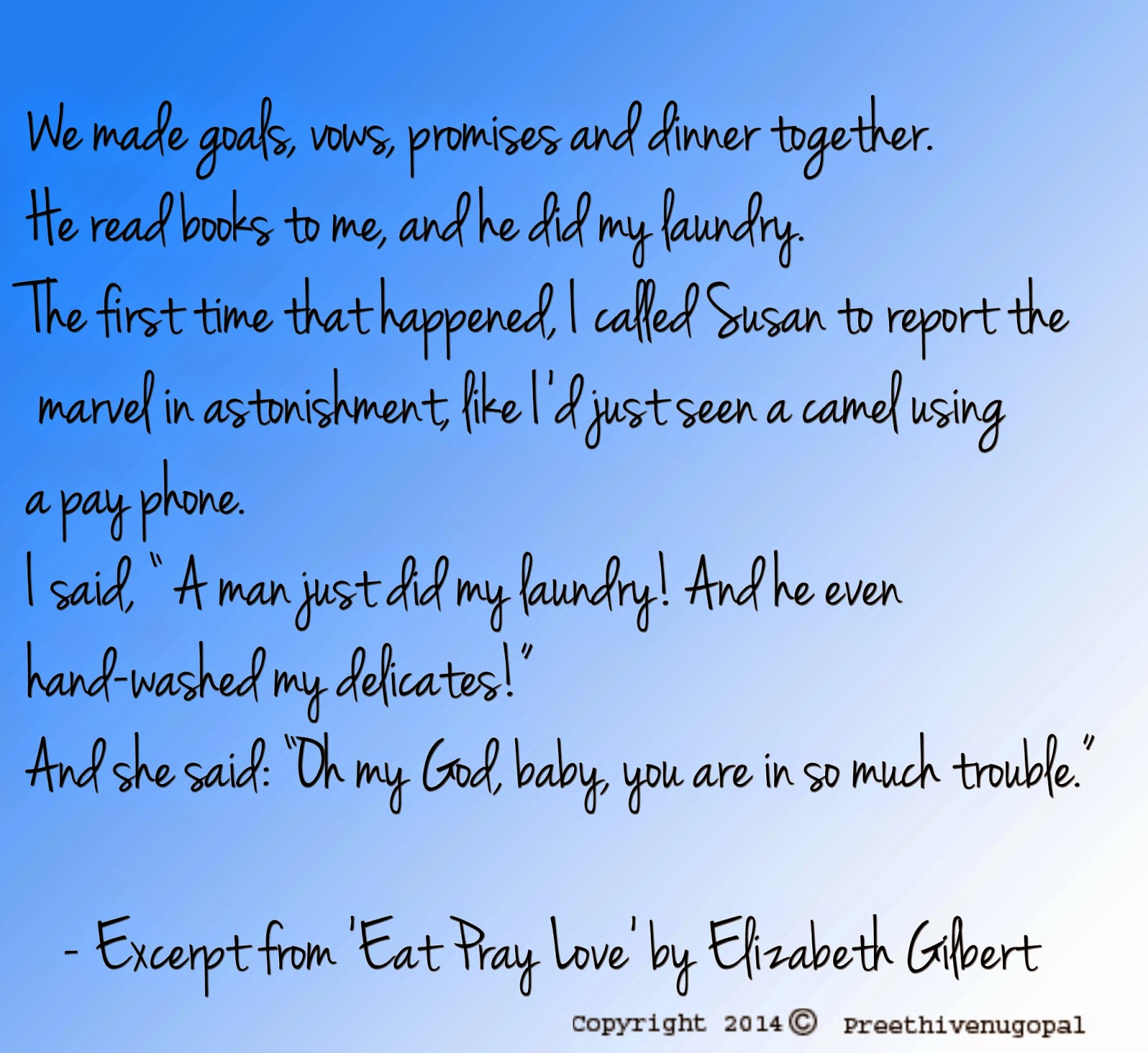 That proves it, the men are the same everywhere. The David mentioned above is a rare creature and is hence coveted by all females, the exact reason why Susan insists that Elizabeth is in so much trouble!

Dear Men out there, can you be Davids at least once in a while?

“I am writing for #IsLaundryOnlyAWomansJob activity at BlogAdda.com in association with Ariel.”
Posted by Preethi Venugopala