2015 was the best year for the author in me. I earned the coveted author badge and saw my debut novel climbing the best-seller charts on Amazon. I followed it up with an anthology of short stories of my own and also wrote a kids’ storybook. Two of my stories appeared in two other anthologies and the Game of Blogs book '6Degrees' was published as well.

2015 was also a bright year for the mother in me. I learnt more lessons from my seven year old than from any other. Lessons in love, compassion and perseverance.

2015 also saw losses. I lost my mother-in-law and also let go of some friendships which had turned sour.

2015 taught me many lessons. Let me list five of them:

1)      Happiness will find you when you expect it the least 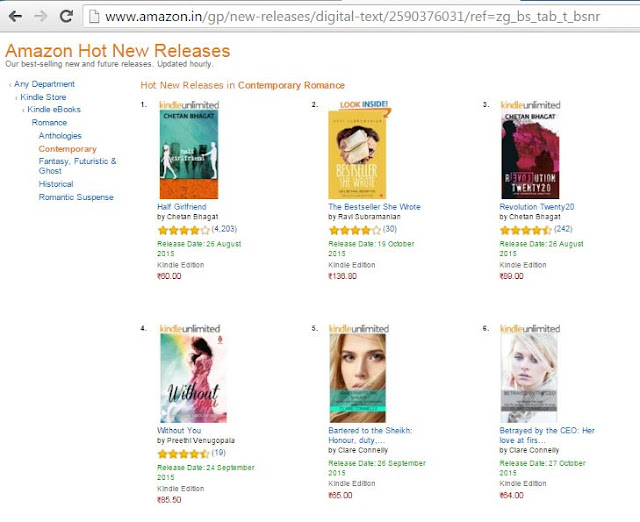 My book was published in June 2015 and many times it climbed the best-seller charts. I never expected that readers would love my book so much that it will remain in the top 100 best sellers for the major part of 2015 after its release. It remained in the top 10 hot new releases for the first three months after its release on Amazon.in. It was popular overseas as well. Both on Amazon.com and amazon.uk. Though I promoted it only via social media, it saw readers pushing it up on the best seller charts.
I had a grand book release held at Atta Galatta in Bangalore. My book was launched by eminent author Nandita Bose, who has proved that most talented people and humble to the core.

The best thing that 2015 has taught me is Carpe Diem. Seize the day and enjoy it like it is your last day. When you do that you will learn to make each moment happy which in turn becomes transformed into a memorable past. I have learned to find beauty in things that we take for granted. Love like there is no tomorrow. Enjoy the warm hugs, the sunsets, sunrises, the cool breeze, the beauty of a bloom, the music of nature and the magnificence of the creator.

Oh yes, it does. I have seen people experience the ruthless effects of Karma. Whatever goes around, comes around. Do good and it will be returned to you. And it is almost instantaneous. It doen't wait years or months or weeks. Tease your Karma, and it will turn back and sting you.

For every one of us, it important to let go of many things. Let go of friends who try to de-motivate you by listing the ways you might fails. Let go of people who try to drag you down to their level of mediocrity. Let go of the past which might tempt you to believe that the best is already over. NO, better days are always ahead. You need to create them through perseverance.

Have a great year ahead!