Happy moments with my best buddy! 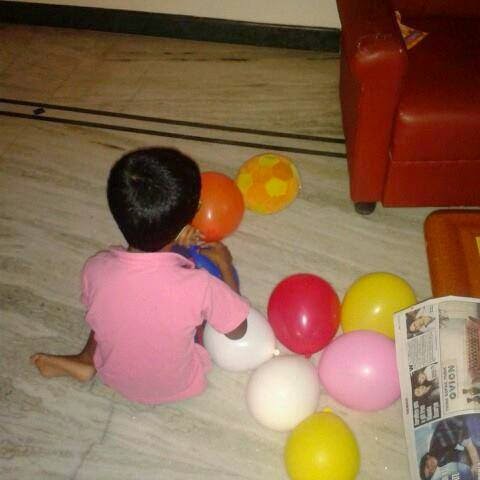 This post is about my best buddy. He is the apple of my eye and makes me want to live better, live happier. He is my son, the best part of my soul.

We met on a warm November afternoon and it was love at first sight for me. When tiny, soft fingers clutched mine for the first time, a promise was made, one often repeated over centuries by mothers wherever they are, whichever race they belong to. During that one moment, I promised him anything and everything that I was capable of giving him.

I couldn’t bear being separated from him for even an hour and when he started playschool the initial days were extremely torturous for me. I would imagine the most dangers that might befall my child at that strange place and would pray fervently to God to keep him safe and happy.

His happy smiling face and the love from his teachers made me realize that he was slowly reaching out to more people and was happily becoming part of a bigger world which was different from the cozy family cocoon that he was used to.

Once he started school, he began to be my friend. He would confront anyone who dared to question me. If I said the earth is flat, he would repeat it to one and all and hell on those who dared to oppose.
We became pals and we discovered cartoons and games together. He would employ my help to conquer the tricky levels in angry birds or Mario and I would earn my payment through hugs and kisses.

He would come home excited about the new secret that he had learned in school.

“Mother, the secret to formation of clouds is wind,” he announced one day.

“Mother, dreams make our tomorrows. So don’t wake me up when I am dreaming. Okay?” Sigh!
Then the tantrums during bath time and dinner. And re-reads of the same bed time stories!
On weekday mornings, he remind me of the little girl I once was, who loved to snuggle deeper  into the blanket and refused to get ready for school.

“Mother, I don’t like going to school. I don’t like my teachers. I love you,” says he and hugs me. Tears shine in his eyes, heralding a barrage of emotional blackmail.

My husband tells me it is ‘Karma’ in action and I struggle to keep my mouth shut.

After the hectic weekdays, we bond over food, games and cartoons during the two blissful days break. When the week begins again, the same old mad mornings return; along with a grumpy six year-old who hates mornings.

I take care that his lunch boxes contain his favorite food and also treats him to good food once he return from home.

I smile the widest when he reaches home from school, slump onto his bean bag and exclaim, “I love coming home.”

When after a hectic day, he sleeps soundly with a slight smile on his face; I offer my prayers to my God, for the best gift he has ever given me.