Review a great book [if you review books] or a great movie [if you review movies] that failed to get the attention of mainstream audiences. Let's help a masterpiece to also become popular through blogging #UnknownMasterpiece

This topic on Indispire this week grabbed my attention immediately. There are many good books which fail to get the attention of the mainstream audience, drowned in the downpour of other cleverly marketed books. I have abandoned many such cleverly marketed books half way through as most of them fail to fulfill the promises that they make during the intense campaigns. Paid reviews and paid campaigns, haven’t we seen enough? But whatever happens, a good book survives.

So when this topic came up, the first book that I thought about was such a masterpiece that I had read recently. ‘Tread Softly’ by Nandita Bose. It is her debut book and a friend of mine recommended the book to me as a very fine read. I had not seen it being promoted heavily anywhere and though the genre is one that I greatly like, I had not read it.
So let me explain why it is a masterpiece.

Blurb:
Paroma had always known that she would have to submit to her family's choice of a suitable groom so it didn't really matter which brother she ended up marrying. A replacement to his step-brother, Abhinn was a curt stranger on whom was thrust the onerous duty of marrying an unknown girl.
Paroma soon found their lives irreconcilable and even social pressure was not enough to compel her to stay. But she returned to Kolkata and began a search for an alternative foothold which she found in a fledgling bookstore. As her bookstore grew, so did her husband's romance with a woman called Geetika. These were, in Paroma's eyes, facts. But beyond bare facts lay lives touched by the magic of proximities and their infinite contradictions.

Dr. Nandita Bose is an artist who dabbles in several art forms, including Khayal gayaki, poetry, art and hopeless romanticism which currently manifests as heart-warming love stories. She specializes in aesthetics and has explored teaching from nursery school to MA levels, corporate training and performance management consultancy. She has written two more novels ‘The perfume of Promise’ and ‘If walls could weep.’ 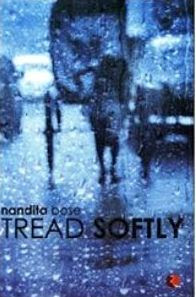 “I was a strong believer in premonitions. I’d always imagined the universe to be kind, forewarning us for whatever trials and tribulations were about to unfurl. Under the circumstances, I had to turn agnostic.”

Thus begins the book that takes you into the world of the main protagonist of the novel, Paroma. Paroma represents the majority of Indian girls who often face the dilemmas of arranged marriages, strange husbands and a life far away from their comfort zones.

Paroma’s situation is worse than a usual arranged marriage. She has been jilted at the last moment by her groom and his step brother Abhinn is asked to take his place. An accidental marriage that doesn’t offer her any options.

“I sat quietly aware that whatever was swirling around the room would affect me most, but I was helpless just as I had been powerless to do anything about my life all along.”

Her thoughts mirror the situation of many would be brides in India where discussions about her life might happen in front of her, but the decisions which would affect her most are often made without asking her opinion. Girls in small towns are often not allowed to speak their mind their whole life. They are taught to adjust and behave.

Paroma is married off to Abhinn who appears aloof most of the time. A strange house overflowing with books, an arrogant spinster aunt, a reckless house maid and many cats form her new universe. She tries to adjust to her new life but the aunt doesn’t miss any chance to remind her that she was never Abhinn’s first choice.

Geetika, a girl who often comes home, has a good rapport with all the member of the house and appears to be the ‘other woman’ in Abhinn’s life. Paroma decides to tolerate her presence as she had inadvertently fallen in love with Abhinn. Her yearning to be loved, her random thoughts, her inner dilemmas and yet her insightful actions makes the book a delightful read.

“In the clear thought that blesses all of us in those nights when we are happy and not a bit sleepy, I recognized that I would never have done what I had now unless I had come to love him deeply.”

The confusions, the lack of communications play havoc with their relationship and it soon becomes strained and reaches a point of break up. Will they be able to rescue their marriage or would circumstances tear them apart? This forms the crux of the story.

The book is filled with beautiful descriptions about the Bengali way of life, human relationships, their food and also love for books. The slow blooming of romance between the Abhinn and Paroma, their interactions, realistic scenes and the first person narration makes you empathize with Paroma.

“But I still craved for that interaction—any interaction— any stray evidence that he acknowledged I mattered, in however miniscule a way I could impact his life, even if not as devastatingly as he had mine…”

The novel emphasizes the importance of communication between husbands and wives and how often unspoken words are the ones that need to be spoken the most.

Among the Indian books that I read recently, this book stands out as a masterpiece due to its fresh concept, Indian-ness, narration and language. The characters come to life through the pages and you either love them or hate them exactly the way the author wants you to.

After completing the book the first thing I did was to check out her other books. I have already ordered her two other novels.

Do pick up the book if you love to read stories that are written in a poetic language that touches the innermost chords of your heart string.