Today on ‘On Writing’, we have the promising new author Avantika Debnath.

Avantika is a corporate professional who gets drunk on good reads. And after having devoured Khaled Hosseini, Erich Segal, Jhumpa Lahiri and Paulo Coelho, she has finally figured out that writing is the only thing she would find solace in. She also has a crazy end to her personality with zero tolerance towards social hypocrisy and the open denial of the truth that prevails all around. A regular contributor in the Chick Soup for the Soul series, blogging for some of the most popular websites, and experimenting with various forms of writing, she has finally worked out her first book, The Bridal Pyre - Nainam Dahati Pawakah. She speaks her mind through everything she writes and doesn't pen a word down if she doesn't mean it. So, only if you can face reality, read her book.

Welcome to ‘On Writing’ Avantika Debnath.

How did writing begin for you? Was becoming an author always your dream or was it a particular event or incident that gave birth to the author in you?

I honestly don’t know, rather don’t remember. My mom has pieces of papers with my scribbles and it’s from when I was 4 or 5. I had written rhymes on my first Barbie doll, a favorite dress, the first rose that bloomed in our garden in Shillong. So, I genuinely don’t know how I took up writing, I guess it happened the other way round. Writing took me up.

How important are the names of the characters in your books to you? Do you spend agonizing hours deciding on their names?

Names of my characters are crucial, in fact, they are as significant as the plot itself. I don’t mind spending hours or even days brooding over their names. It is not about how pleasant they sound or how unique these names are, it is about how the names resonate with the characters they embody.

My writing process is that there is no writing routine or schedule. I am very impulsive when it comes to writing. I might be in the middle of my dinner and a thought could strike my mind. Till the time I do not pen it down, or rather type it down, I do not find solace. I cannot think for hours and write deliberately. Words need to flow through my mind. That is how it works for me. But I love to write or even read for that matter on a cozy couch by my window.

What is special about ‘Bridal Pyre’? How long did it take to complete writing it?

The Bridal Pyre is a journey from illusion to reality, and a journey every woman, especially the Indian ones had to embark upon at some point in their lives. I have come across many women and was moved by the unjustness of their regular lives, the contradiction between what they were brought up to believe and what reality turned out to be, mostly as far as marriage is concerned. How in a society like ours, matrimony is considered paramount, the one aspect of life in favor of which women are encouraged and forced to give up everything and still fall flat on their faces, bewildered me. The promises of love that more than often prove themselves fake broke my heart, the relentless battles of an average woman confined within the four walls of her house, paternal or matrimonial startled me, and to condemn that, to bring that to light, I penned The Bridal Pyre: Nainam Dahati Pawakah. It took me about two years to complete it.

Who is your favorite character in the book and why?

The protagonist Meera is my favorite character. She is neither perfect nor flawed. She has virtues and faults just like you and I. And that makes her relatable to the core. Every reader would be able to identify with her or will be reminded of at least one woman in their circle of friends and family by the story of Meera. Also, in the ups and downs of Meera’s life, you will somewhere find a struggle you have put up with, maybe not the extremes that she had to deal with, but some episode of her life will bring back one in yours.

This one, because though Meera says these words, you and I at any given moment can count at least 10 women around us who feel exactly the same way, whether or not they choose to accept it aloud.

Is there a certain type of scene that is harder for you to write than others? Did you face such an issue while writing ‘Bridal Pyre’?

There are a couple of them. But the most difficult scene that I wrote was Meera’s miscarriage in The Bridal Pyre – Nainam Dahati Pawah. More, so because the amount of emotional turmoil this character goes through along with the physical pain. This was my first work as a novelist, I am not sure if I could do justice to the situation. But I was writing this scene, and I had to stop for a while, cry, get myself a cup of coffee, and go back to completing the scene.

What is your method of writing? Are you a plotter?

Honestly, I do not believe in methods when it comes to any form art. Methods, I as they appear to me, limit your creativity. But that’s just my opinion, other might find it easy to work in a method. Plots present themselves to me when I am doing something really important and unrelated to writing, I take them down in a notepad, later work on them in details.

Which do you prefer as a reader? EBook or Paperback?

I prefer a Paperback any day. I am so old school. I had a Kindle and I lost it somewhere, I was not even bothered because I don’t even remember using it.

What are the three tips you have for readers who are aspiring writers?

1) Be Original
2) Don’t get disheartened by refusal
3) Don’t believe them when they say you are not good enough, they just don’t get your art.

Thank you, Avantika! Wishing you the very best for your book. 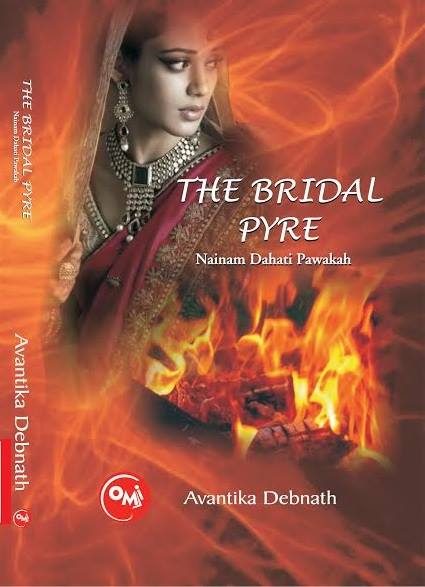 "Girls need to adjust a little after marriage." Said her mother. And she obeyed her mother's words. She gave up on her dreams... her hopes... her happiness... her self-respect... her father's dignity... her mother's honor... and herself. But she couldn't give up on her child. The child whom she never saw, named, or held close to her heart...The child whom she couldn't give birth to. She obeyed her mother's words but then.... Her own motherhood was taken away from her. She blew the conch shell and declared a war. She stood against all, the husband, the society, the law of the land and the leaders of the people. The local goons....politicians ...corrupt police officers and lawyers...irresponsible judges...the opportunist media...the futile judicial system...wasted legal system...no one could stop her. She feared none. She could not be broken or be burnt....And they said even the holy Ganga would refuse to immerse her... She was no more a body with a soul. She was a soul with a body. And the soul doesn't get torn, doesn't get drowned, and doesn't get burnt. She sat on her pyre and set it ablaze....The Bridal Pyre....but, Nainam Dahati Pawakah