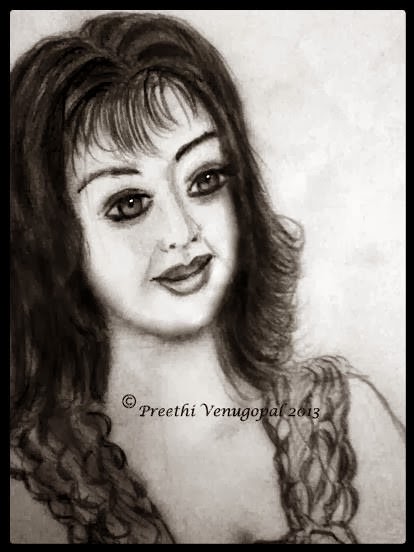 Maria loved writing letters. They made her feel alive and brought cheer into the colorless life that she led. The addressee, never received these letters as they never found way to the mailbox. They were the bearers of her unbridled emotions, her toughest decisions, her heartbreaks. Every single one of them addressed to the man she had almost married.

It had been a life changing summer for Maria, the summer of 1978. Joseph came into the cafeteria where she worked, drank coffee, ate croissants and scones and somehow found way into her stubborn heart, which had never opened up to anyone. Joseph asked her out for dinner that night and one thing led to another and soon they were a couple. He was a bright student at the nearby university, studying to be a lawyer and she was an eighteen-year-old high school dropout , who was the lone bread winner for her family- a sick mother and three younger siblings.

Days passed and within a year, Joseph proposed. During their wedding rehearsal, she overheard an intense argument between Joseph and his professor Mr. Smith, his mentor as he had often mentioned.

“You are committing the biggest blunder of our life. A life with Maria would lead you nowhere; my daughter is the one you deserve. You need funds and she comes with that. You need a highflying career, for godsake. Marrying that good for nothing waitress would put an end to all your ambitions,” said Mr. Smith.

“Mind your words professor. You are talking about my would-be-wife. I don’t care for the riches or my ambitions. I love her. I love her more than I love my career. I know you are right, but I can’t and won’t leave Maria. I gave her my word. I won’t betray her,” said Joseph and something in his voice told Maria that his decision was killing his dreams. Eventually it would kill their love. Was their love strong enough to stay afloat in the bitterness of disappointment?

Next day, a note arrived for Joseph early in the morning. It was from Maria.

“I set you free. Go live your dreams. I will never be a hindrance in your path. God bless.”

Maria ran away to North Carolina and settled there for life. Her Joseph, married Mr. Smith’s daughter Linda eventually.

“They make a fine pair,” Maria told her mother when the marriage photo of the senator from Texas appeared in the newspaper.

She wept hot tears, wrote a long letter congratulating Joseph, and added it to the pile of unsent letters that occupied an old iron trunk.

Years again passed and soon Maria watched Joseph taking oath as the President of the United States.  Every day, Maria devoured the newspapers which would have photos of him attending one or the other function. As the initial euphoria of celebrating a new face died down, the press as it often does, dug into Joseph’s past and published an article about the girl the President had almost married. That led to a series of articles that sought to find her current whereabouts.

One young reporter from the New York Times, Nancy Daniel traced Maria to North Carolina and next day pictures of her appeared in the front page of all national dailies. Myriad Captions adorned her photos. “Almost First Lady.” “The Lady who lost it all.” Maria cringed. Her house became surrounded by paparazzi. She never spoke to anyone. Her neighbors and friends hogged lime light by giving interviews to magazines and newspapers. Her visitors tried to pry details from her. She kept mum.
One morning Maria woke up to an article that featured her trunk of unsent letters. It even had excerpts from her letters, which was an outpour of her love for Joseph. Maria ran inside to find the trunk gone. All she could do was weep. They were not just unsent letters- they were her soul.

A few weeks later, in the middle of the night a sleek black car arrived at Maria’s house. When the bell rang, Maria opened the door to find two soulful eyes looking into hers, a pair of blue eyes, which haunted her dreams every night.

“Yes, Joseph,” that was all he said before kicking the door closed. Without waiting for another moment, he pulled her into an embrace and Maria forgot the world. Her tears drenched his shirt.

How long they stood that way, they would never know. But eventually they managed to sober down and Maria made coffee for him- without milk, two spoonfuls of sugar, just the way he liked.

“Get ready to be the First Lady Maria. And trust me, this time if you leave me at the altar, I will follow you even to the ends of earth and I will punish you for making me go through hell these past fifteen years,” he said.

“What are you saying? You are married. And that too happily. I have articles to prove that,” said Maria.

“Newspapers, they seek news and we feed them fake news. The last time I believed in a news was the one I read about a trunk full of unsent love letters to the President. All the rest are fake news my dear Maria. Linda hated me; she had affairs after affairs but stood by my side only to help her father realize his dreams of becoming the Kingmaker, the father-in-law of the President of the United States. He died last month and Linda left me officially yesterday, freeing me to seek you out. Her nemesis as she used to call you, the reason I never loved her. I never got over you my Maria, unrequited love is hard to forget. I know you did not forget me, the trunk that lies hidden in my personal chamber holds proof,” he said and wiped the tears that were steadily streaming down Maria’s chin.

Days later, a Lady dressed in a blue summer dress accompanied a smiling President to board the Air force one that was taking off on a two-week long official visit to Europe.

“My Lady, remember this is our honeymoon trip. Be near me always,” whispered Joseph with a wink, holding the door to their cabin open for Maria to enter.

“I will, every moment I thank my God for giving you to me,” said Maria and the tears that shone on her lashes were proof of her everlasting love.

This story is written for Indispire