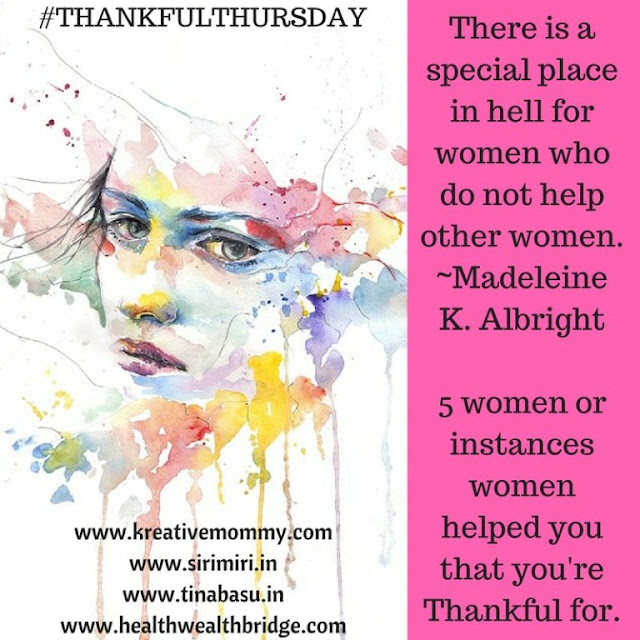 March 8 is international women’s day. As a woman, I always feel women lack unity. We often hear about ‘bromance’ where men support each other through thick and thin. Unfortunately, when it is between women, often friendships do not have that kind of endurance. It is a very rare gem that we don’t often find. Jealousy, backstabbing, and gossip often ruins great friendships. Many don’t understand that a kind word, an apology at the right moment can make so much of a difference.

For a small village girl like me, the privileges I have acquired, especially in the field of education, life, and career have come through a lot of hard work. Throughout my life, I had strong women I could look up to, whom I considered as my idols. These women not only inspired me but instilled a strong belief that I should always root for the truth.

At every turn in my life, I have also been helped by women. I wrote this post where I mention some of them. Today I wish to talk about another five strong women whom I truly admire and am thankful for.

When I was about to be married, as was inevitable, I received cooking lessons from my mother. But after marriage, I realized they were of no use in my new household. There, the style of cooking and the recipes were entirely different. Even the vegetables and ingredients had strange names. My husband’s house is on the Kerala-Karnataka border and hence their day-to-day language had mostly words from Kannada, a language I barely knew. For example, 'chali' meant mud in my language whereas for them it meant a cold weather. You can imagine my confusion. I had no clue, but my mother-in-law helped me learn everything one step at a time. She also taught me many home-remedies. We lost her in 2015, but her recipes and tips continue to rule in my house.

My husband is the youngest in his family and hence his niece Sapna is one year older than me. When we moved to UAE, I had an easy time adjusting to the new place because she was settled there since years. We would roam around shopping, visiting malls or just eating out. Even after I started working, I would visit her home on weekends to savor her tasty biriyani or her latest cooking experiment. Her daughter was my pet. I am thankful to her for being my best companion during those days in an alien land.

Different nationalities, religion or our hectic job schedules did not come in between our friendship. Rona is from the Philippines and an accountant. She is an expert in Ms excel. She taught me so many excel shortcuts that made my work super easy. We were also foodies. I made her try biriyani and she, in turn, made me addicted to chocolates, especially Hershey's chocolate kisses. Clicking pictures using the camera of site engineers when our construction manager went out was one of our hobbies. Exchanging stories another. She was one hardworking girl who was shouldering the responsibilities of the education of her younger siblings. I was always in awe of her. She taught me a bit of Tagalog and I even learned one of their popular songs. I was her ‘ate’ or big sister. I am thankful, Rona for all the fun times we had.

I met Saileela, a manager at IBM at a Reiki class and we became friends there. She, later on, went on to learn Quantum Healing Hypnosis Therapy (QHHT) from Dolores Canon. At that time, I was going through a mild depression after my father passed away and she offered me a chance to experience past life regression. To say the least, the whole experience was magical and life changing for me. It changed my entire outlook towards life and I found a purpose in life. I owe my career as a blogger and writer to that session which put me in touch with my higher self. The session also triggered many story ideas. I have published a few already. Like me, she is a believer in all things esoteric like angels, aliens, reincarnation, and fairies. If you wish to avail her services, contact her at www.saihealing.net. I am thankful Saileela, for being my guide.

Varsha is my junior from school and a working mother with an MBA. But for Varsha, perhaps, I would never have completed my debut novel. She was my first beta reader. After I completed each chapter, I would send it to her for feedback. If I didn’t send at least one chapter a week, she would send me emails urging me to write. With a demanding pre-schooler at home, I would have simply abandoned the manuscript if not for her. For my second novel also, she was my first beta reader. Thank you, Varsha for being a true friend.

This post is written for #ThankfulThursdays being hosted by Deepa, Amrita, Tina  and Mayuri
Posted by Preethi Venugopala